Stockton-on-Tees is a market town in North East England with the River Tees flowing through the heart of the area. Stockton town centre is currently undergoing a £20 million redevelopment, which will result in the area experiencing the greatest degree of physical change for a century with the plans building on the areas major assets, in particular the river corridor, and the transformation of former industrial areas and the town centre also being a key focus.

The goal is to enhance the ambiance and quality of the surroundings, which is reflected in the vision for the regeneration: "To deliver a step change in the quality of place, and use it to help deliver the sustainable economic and social renaissance of Stockton-on-Tees".

The transformation of the banks of the River Tees was a significant part of the town centre regeneration scheme, with the aim of drawing visitors and local people to the river as part of their time in the town centre, supporting the areas businesses and housing developments and also encouraging further regeneration on the waterfront.

The challenge was to breathe new life into Stockton’s greatest asset in a sustainable manner, transforming the under-utilised riverside. Lighting was always set to be a part of this transformation but not to the extent of the final solution.

Stockton have a track record in delivering nationally acclaimed town centre events including the hugely successful Stockton International Riverside Festival, a 3 day music event attracting thousands of visitors to the site. The main focal point of this event is the river bank to the north west of the scheme.

Completed in June 2012, the riverside lighting scheme stretches from the Princess of Wales Bridge to the Millennium Bridge, a distance of approximately one kilometre and capitalises on the natural asset of the river as it flows through the town centre by lighting two iconic bridges, the Princess of Wales Bridge and Stockton Millennium Bridge and the linking river banks between.

Completed in 2000 this footbridge links Stockton’s Castlegate Centre with the campus of Durham University at Stockton and other new developments on that side of the Tees. It is suspended from cables hung from a 40 metre high mast.

The bridge links Teesdale Business Park on the south bank of the river to Riverside Road on the north bank.

The main span of the footbridge is illuminated using six Philips ColourReach Luminaires three illuminating the upstream side and three the downstream. The units are mounted on columns on each side of the bridge structure.

A variety of lenses were specified to maximize the utilisation of light and reduce glare.

In addition each leg of the 40m mast is illuminated on three side with Philips ColourReach Luminaires using a very narrow beam to illuminate the full 40m height.

Currently the Bridge is painted dark blue however as a result of the lighting scheme the planned painting regime is being modified to use a lighter and more sympathetic paint system in an effort to improve the impact of the lighting.

River Basin
The kilometre of river basin between the two bridges is lined using a continuous row of LED nodes spaced 12 inches apart, to achieve this effect we used 42 separate sections of the Philips LMX system mounted 600mm to 1000mm above the water level. Each node is individually addressable and controllable.

All of the colour change luminaires are controlled by a central control point sited centrally on the scheme.

The system uses Pharos control system and a wireless ethernet and conventional ethernet protocols to neatly link the separate areas of the lighting systems into a single harmonised control system, conventional DMX protocols were not acceptable given the multi universe nature of the scheme.

Given the close link the area has with musical events the system has incorporated an interphase to allow event organisers to link any stage lighting system with the riverside lighting truly bringing the area to life during an event.

This system will be accessible via a web based browser interface allowing remote access.

The budget for the riverside lighting improvements was £400,000. 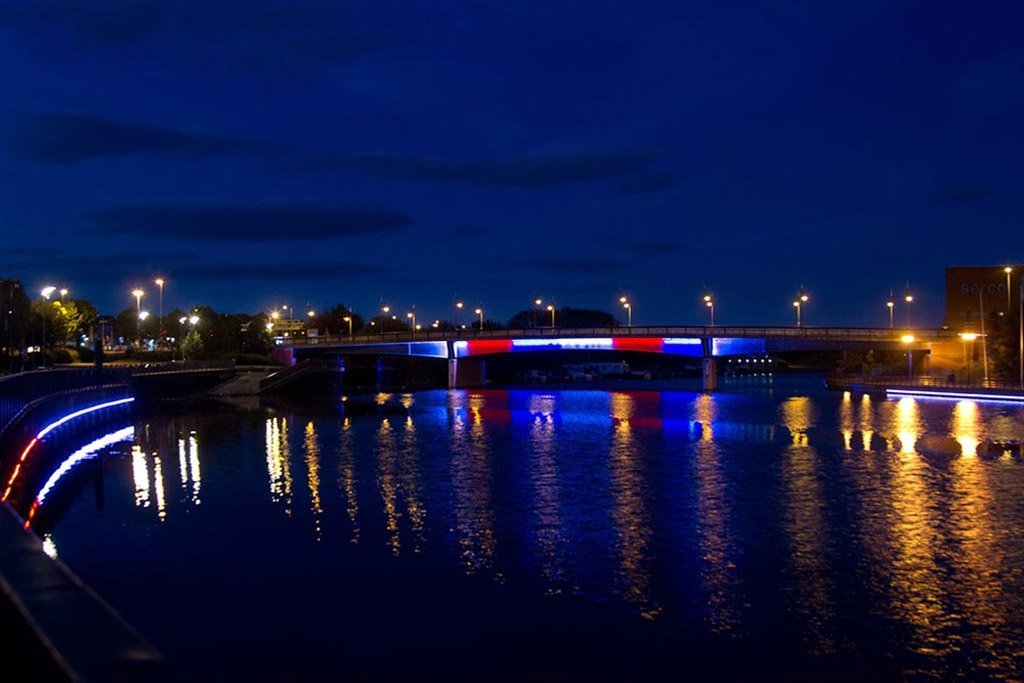 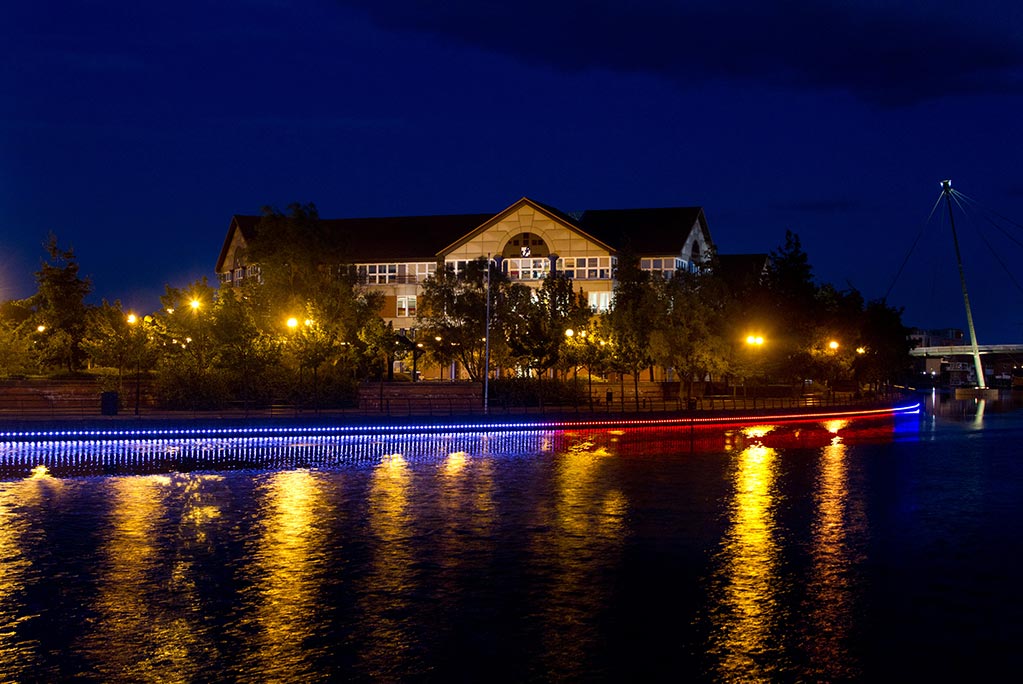 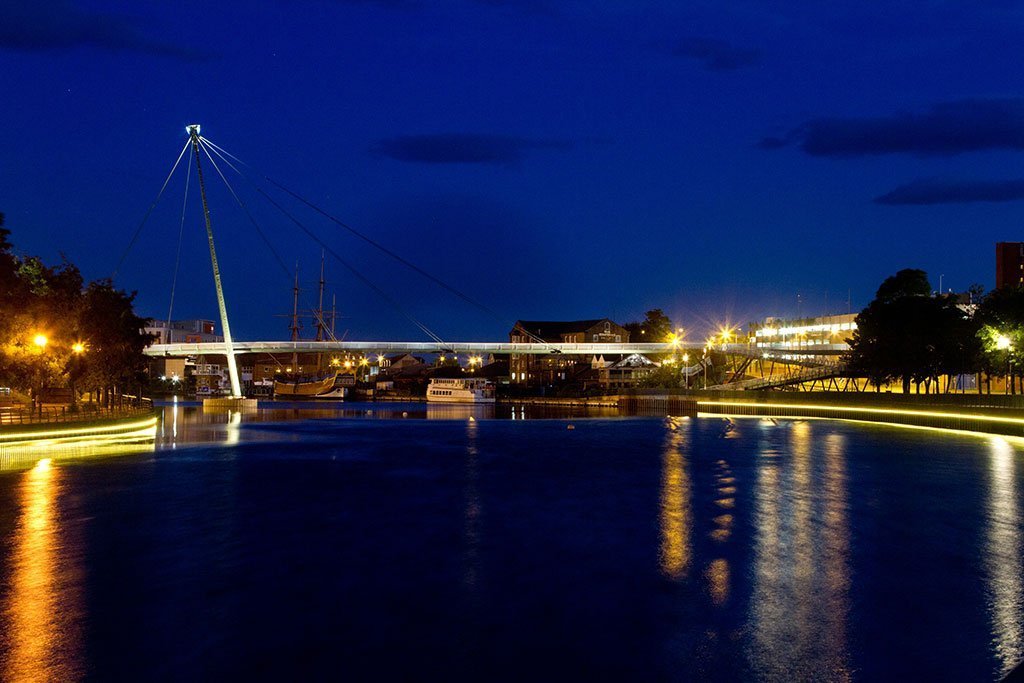 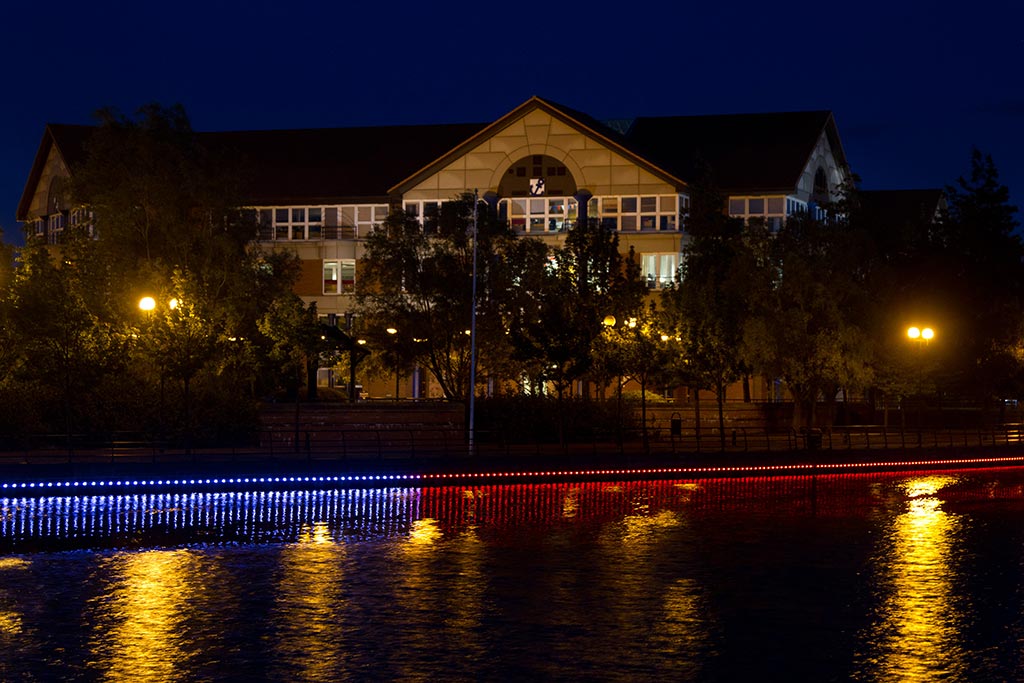 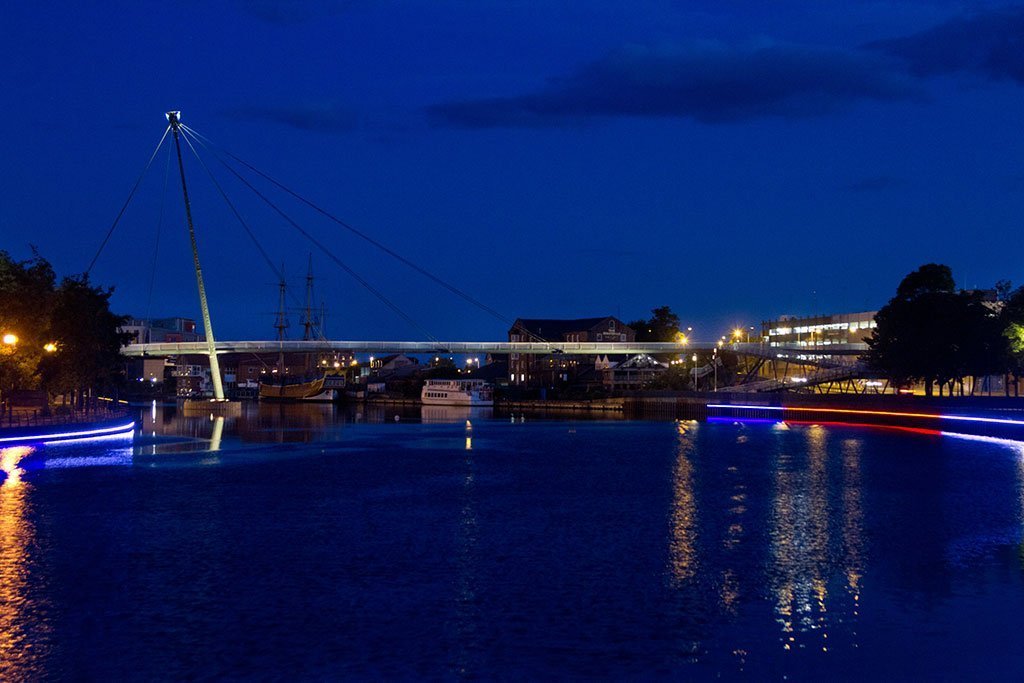 The objectives of the creator / designer

The River Tees is one of the areas best natural assets. Despite Stockton having an attractive riverside, many people are not taking advantage of the new facilities and developments taking place there.

The vision for the lighting scheme was to create a vibrant and interesting environment rejuvenating an under - utilised area and attracting visitors all year round.

During normal operation the scheme had to complement the surroundings, however it had to have the versatility to celebrate specific events and integrate into the town's vast programme of popular riverside events from the Stockton International Riverside Festival to the Stockton Triathlon and Stockton Cycling Festival.

This requirement for a vibrant and flexible lighting installation lead to LED as an obvious choice, the number of events utilising the area also pointed to the use of colour being appropriate.

The lighting designer developed a solution which linked two very architecturally different structures, with the flexibility to provide a clean static lighting solution to a vibrant public area pulsating in time with a modern music event.

The programming of the scheme has been developed in partnership between the conditioning company, the lighting designer and Stockton Borough Council

It was also important that the design of the lighting scheme reflected the flow of the river and carried the eye along the riverside. The design uses light and movement to reflect the energy of the water.

The versatility of the scheme was demonstrated not long after switch on with the programme altered to celebrate an Olympic gold medal winner returning to her home town of Stockton. The scheme was programmed to chase red white and blue before changing gold in celebration.