The existing floodlighting, installed in the 1960s, had reached the end of its serviceable life and the lamps and control gear were no longer energy-efficient. Therefore it needed replacing, using modern equipment.

The Castle’s former lighting scheme used a mixture of 250W to 1000W HPS projector floodlights – these were generally located 10-15 metres from the main fabric of the building and had fallen into disrepair. They also created significant obtrusive light into the Castle windows.

In total 37 luminaires were removed and 107 installed. With Three types of lantern from Urbis Lighting were selected, namely Neos-2, Neos-1 and Noctis 225. To maximise the impact of the lighting 17 different bespoke beam configurations were specified, many using multiple optic types to create the desired effect. The LEDs used were High Power Cree XP-E and XR-E, all driven at 350ma with seven individual optic types provided by Carclo. Given the need for consistency in light source colour temperature throughout the project, we involved the lantern manufacturers at the design stage and provided input into the selected “bin” of LEDs. This ensured that variances in colour temperature were within 100K.

The existing floodlighting, installed in the 1960s, had reached the end of its serviceable life and the lamps and control gear were no longer energy efficient. Therefore, it needed replacing using modern equipment.

All the lighting units are fully controllable using a DMX protocol. During the design of infrastructure, luminaires were grouped into logical zones that would each connect wirelessly to the main DMX controller. Each zone consists of a DMX receiver which then uses a more traditional cable link between luminaires, to form the DMX network.

Simple remote access to the DMX controller was important and from previous experience, the Pharos LPC1 lighting controller was the most appropriate. The LPC1 will be linked into Durham University’s Ethernet computer network and access given to specific users from both Durham County Council and Durham University, in order to accommodate changes in the lighting for special events.

Given the historic nature of the building, the risk of finding buried artefacts of archaeological significance were real and potentially costly in terms of time and money. To mitigate this, the design utilised existing cable routes in previously disturbed ground, with the depth of any buried equipment limited to 300mm. The contract specified that groundwork should be undertaken early in the installation phase to minimise the impact on the programme of any archaeological finds. Any digging was subject to constant archaeological oversight in case articles of interest were found. 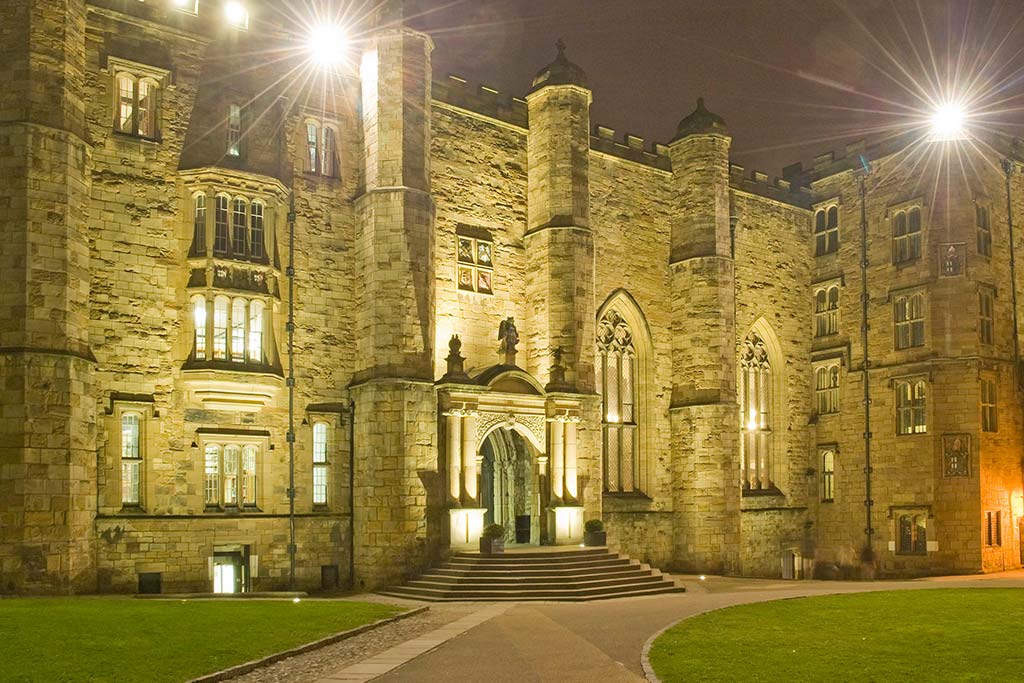 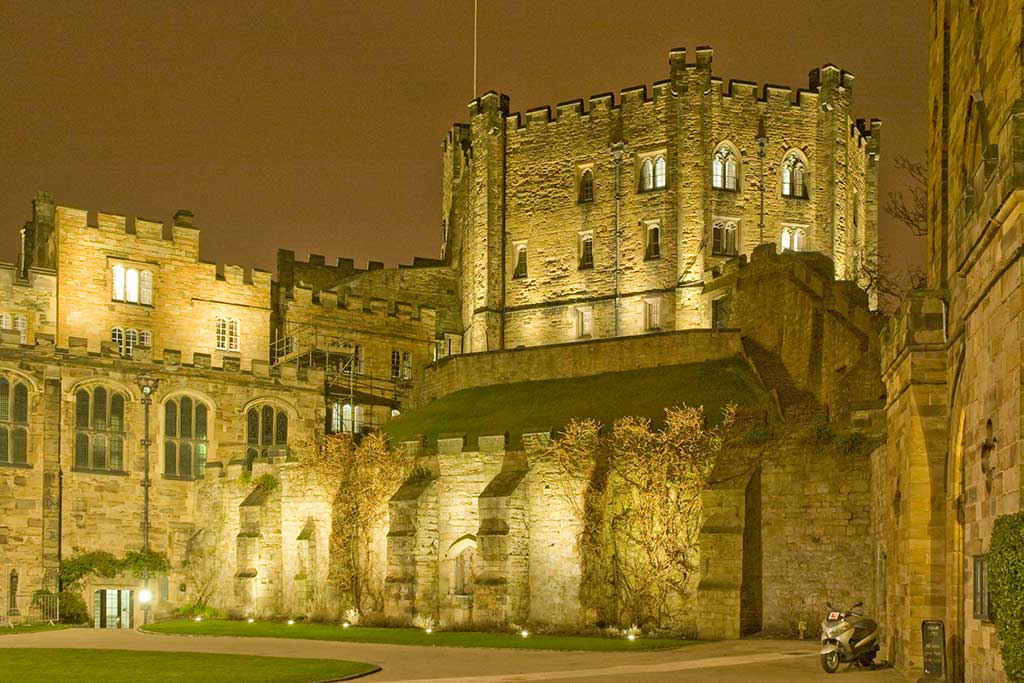 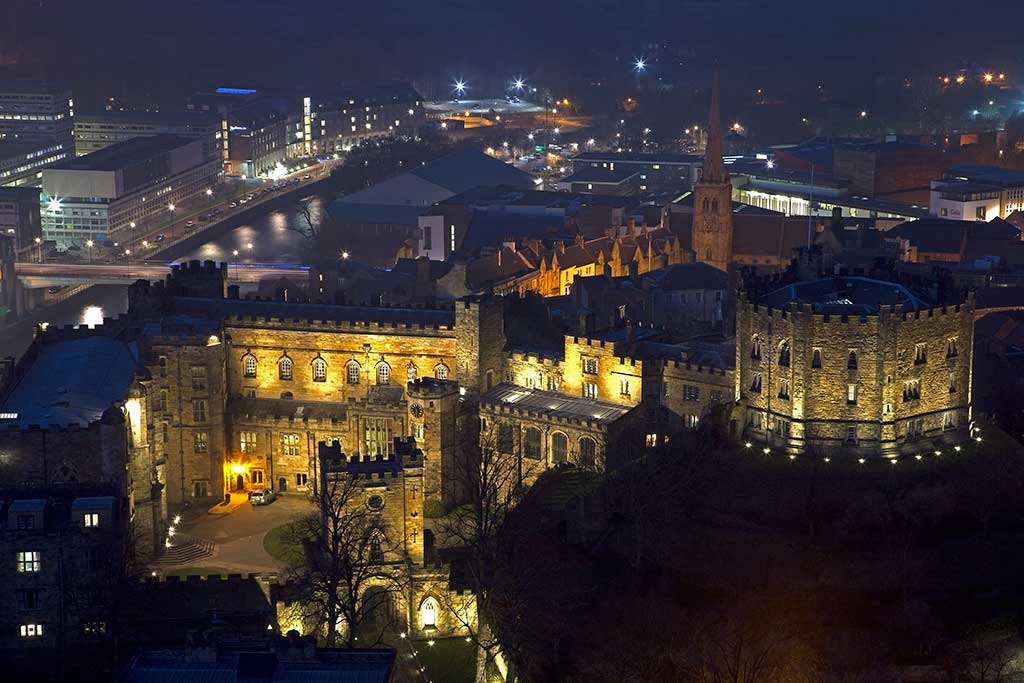 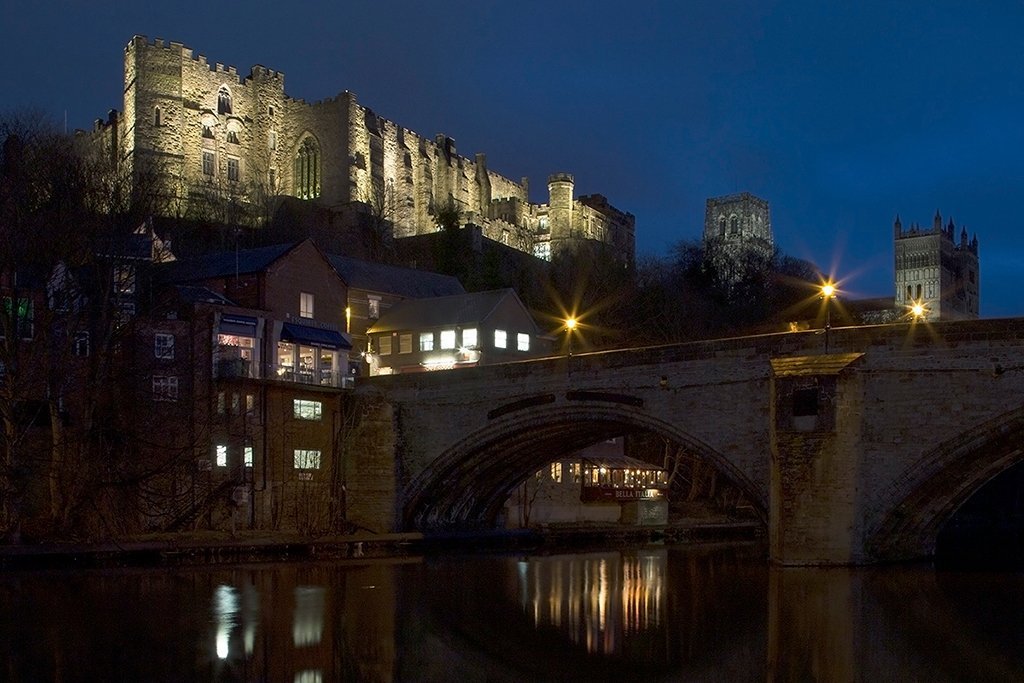 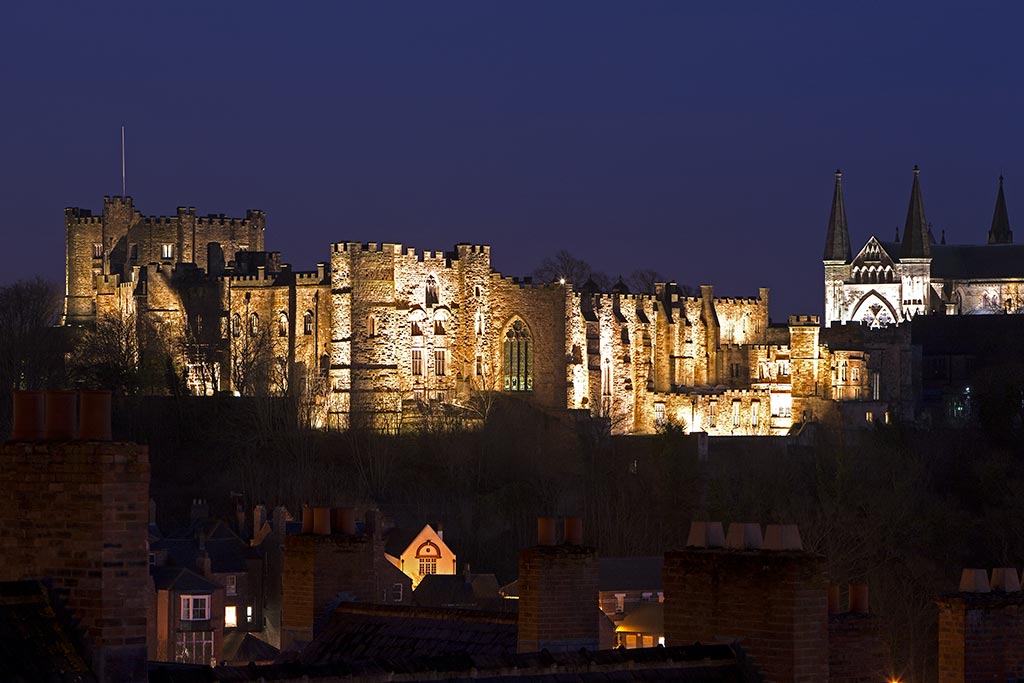 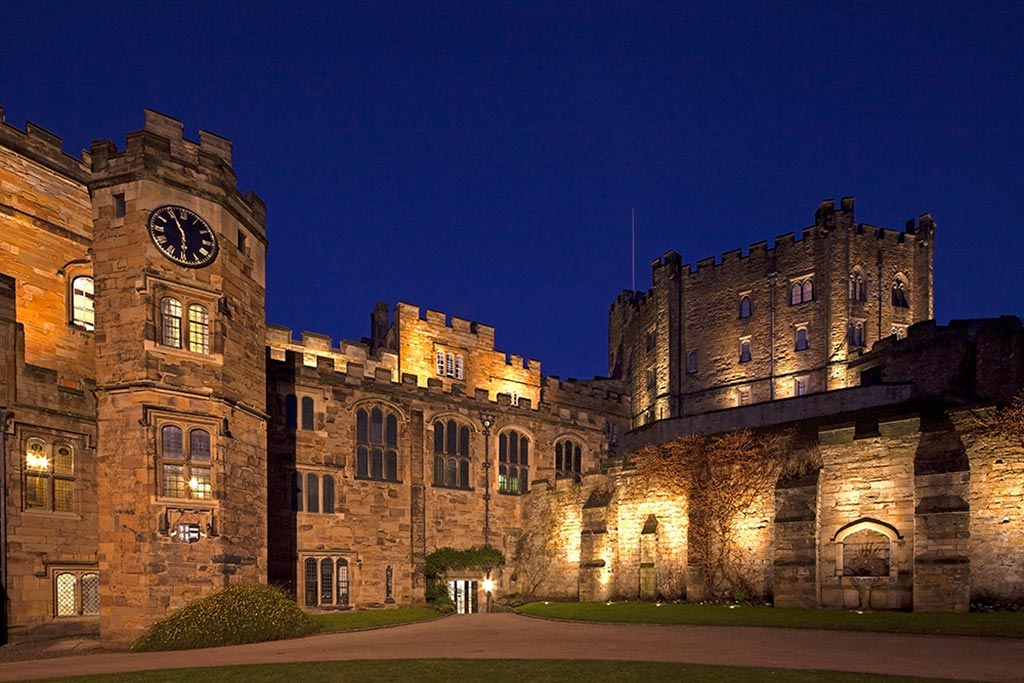 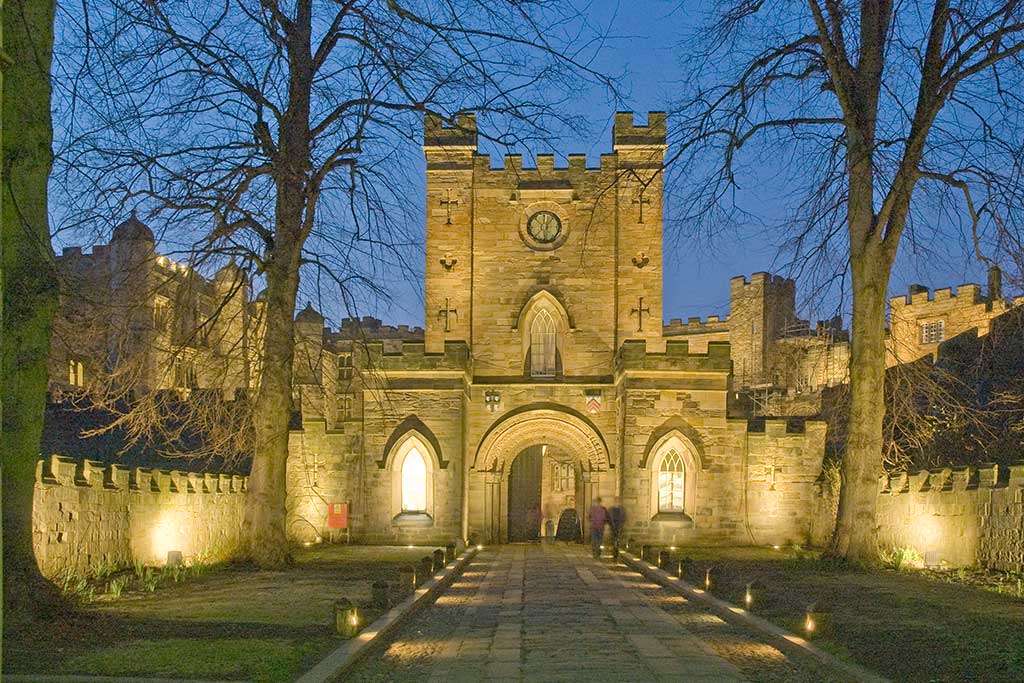 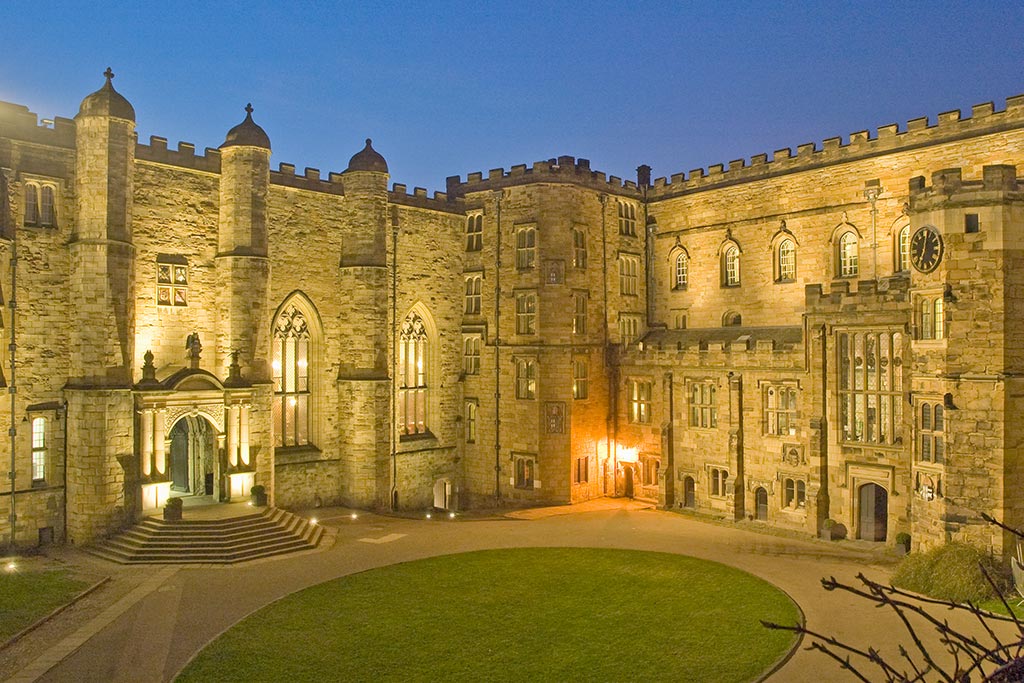 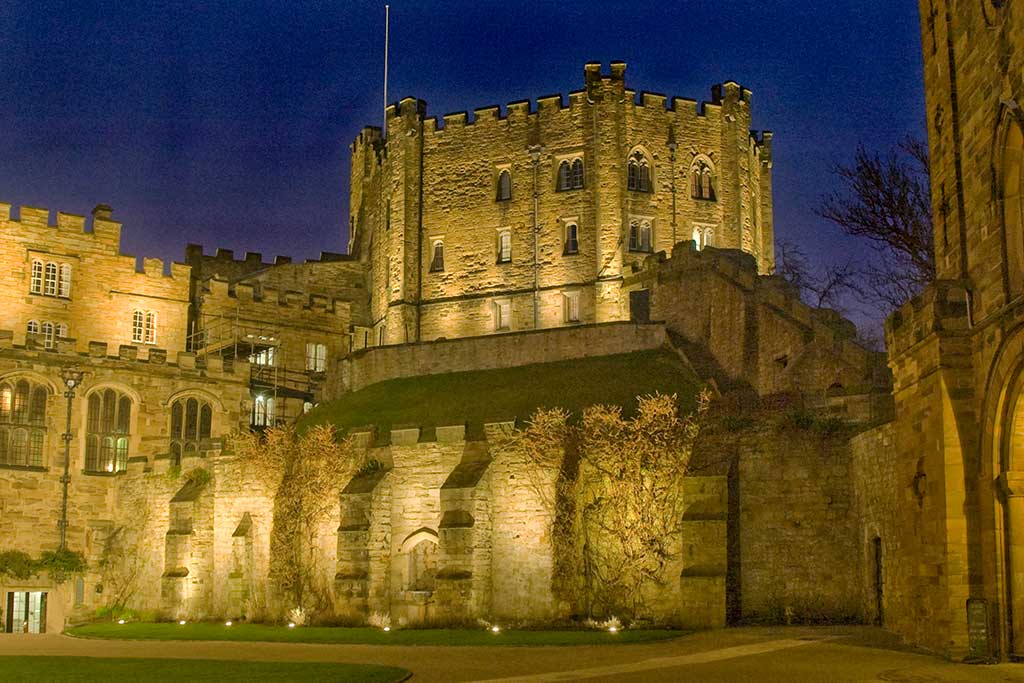 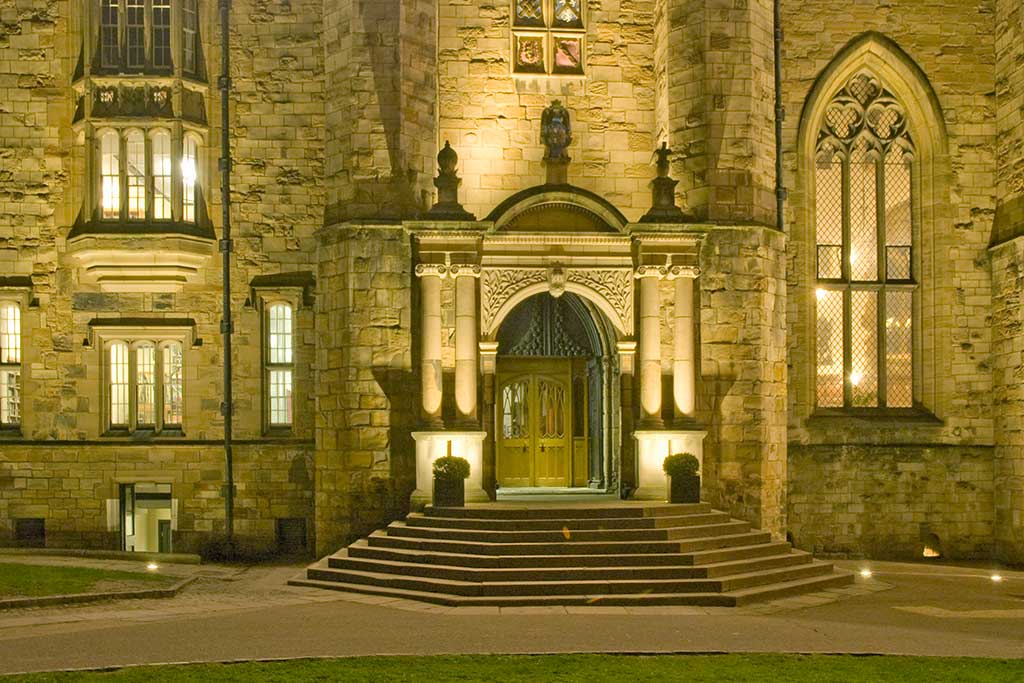 The design team was aware of diverse ecological issues within the vicinity of the Castle – in particular the presence of bats, mostly the Common Pipistrelle species, foraging in the area. A detailed bat survey was undertaken to identify existing roosts. The lighting design took into account this information and the three areas where roosts are situated were specially evaluated. This led to the decision not to illuminate these areas, which had minimal adverse effect on the scheme.

The scheme was managed by Durham County Council and Durham City Vision, who created a working ethos of partnership throughout the project. This partnership approach enabled us to engage building owners, planners, English Heritage, ecologists and archaeologists at a very early stage in the design process to ensure minimal delays. We were also encouraged to involve product suppliers and the appointed contractor in the development of the scheme as early as possible.